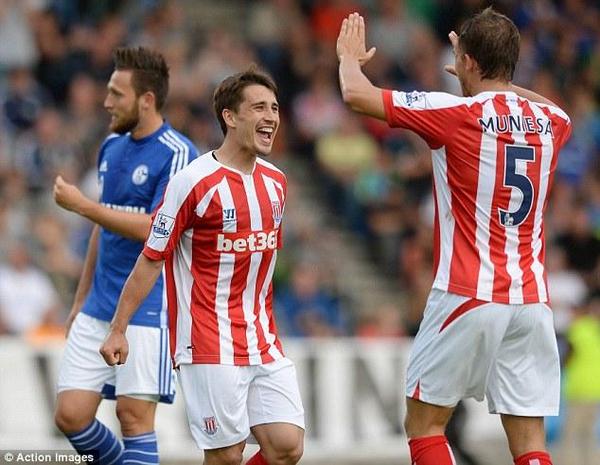 BojanKrkic registered his first goal for Stoke City during the 2-1 friendly defeat at the hands of German club Schalke 04 a week after his transfer was confirmed. The Spaniard was also on target in friendly wins over Spanish La Liga team Real Betis and fellow English outfit Blackburn Rovers.Bojan made his competitive Stoke City debut in the 1-0 home defeat to Aston Villa in the Premier League on August 16, 2014 and he impressed a lot of people despite the fact that he didn’t find the back of the net. A couple of poor performances followed for him thus prompting manager Mark Hughes to say that he's prepared to give BojanKrkic enough time for him to adapt to the English game.

Stoke City manager Hughes had earlier made the decision to remove BojanKrkic from his starting line-up. He restored him into his starting line-up for the 2-2 draw with London team West Ham United on the first day of November 2014. Eight days later, Bojan scored his first Stoke City goal in the 2-1 away win over North London side Tottenham Hotspur in the league. He was also on target against another North London team in Arsenal on December 6, 2014. Bojan scored one of the goals in the 3-2 win over the Gunners. Twenty days later from the Arsenal game, Bojan was adjudged to have been brought down in the box by Everton midfielder James McCarthy and he scored the resulting penalty for the only goal of the game.
BojanKrkic was in his best form before a knee injury suffered in January 2015 ended his season. The attacker was at Stoke City for five years before he left by mutual consent.